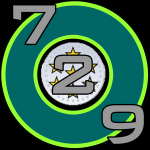 Hello, everyone. 729MendicantTide here, d.b. (on Xbox Live) a.* VanguardUltra! I have been playing Happy Wars since August of 2013. My initial experience in this game was pretty decent. It took me some time to handle the learning curve on this game, and ever since, once everything was so clear to me, I consider myself a force to be reckoned with. I describe my playing style as leaning toward the tactical side of things (you may have seen me as a heavy priest (a.k.a. cleric) user. I do, however, have proficiency using the other classes, so every once in a while I would pull out magic and swords.

I am also this wiki's Japanese language contributor. For those wondering, Japanese is a second language for me (the American school system does require 2 years of the same foreign language).

If anyone wishes to play a match with me or add me on my friends' list, feel free. My XBL Gamertag is VanguardUltra. If you want to add me on XBL, you must either be a member of this wiki or any wiki or site I am on for at least 60 days, or at least played a stream of matches with me. Do look below in the Gallery for my XBLA characters in case you do not recognize me as 729MT.

Be warned: Most of my classes have 9 skills at level 5.

Also, I have spent ONLY $10 on this game, and plan not to spend any more (excludes annual Gold cost). This was on a Superpremium blowout.

For those who wish to play with me on Steam, my name there is Okami Eclipse (former name EclipseMT).

This section will cover how my Happy Wars characters evolved from vision to concept and from concept to creation. Most have a stark LOTR and Earthbound influence. List only covers XBLA characters.

My first warrior's final design came from the idea of my 2nd priest. In The Silmarillion, they mention Elrond having a twin brother (who chose the Mannish fate rather than the Elvish fate, like Elrond). This character partially reflects his lesser-known twin. He has the exact same face as his twin (in my lore, they too, are also twins). But to reflect their different choices, I, in my lore for my HW characters, gave them starkly opposite but similar personalities (but not different voices in-game), and made them two different classes. I view Clerics in-game as more biased towards the Elves (Elrond already has ressurection powers), and Men more to the Warrior side. In my lore, his stark opposite portion is his hasty nature, but still evaluates decisions well.

Initially, when I unlocked the Berserker, he filled in the spot. Now, I up-downgraded him to my warrior for two reasons.

Epic Japanese Samurai gear. Changed him to a berserker just because of it. Makes him look tough, and that is what 'zerkers are supposed to look like. In my lore, he is half-Scandinavian, reflecting the berserker's origin: Old Norse Scandinavia.

My concept for my third is really interesting. In The Return of the King (and its epic film adaptation), the character Éowyn disguises herself as a man and rides out to war (and in the book, she creates a fake alias to facilitate the disguise). By default, the third warrior is female, as well. So I made it custom for my third to have only a helm that mostly conceals the face (so one cannot define gender). Initially, I used the Beast Warrior Helm from a Castle Defense gamemode. Eventually, the announcement that Item Shop was being overhauled came along, and I really wanted the Demonic Helm as it was fitting for such a heroine with the archtype I provided. So I loaded $10 of Happy Tickets into my Gamertag, bought the set, and loaded the rest in Happy Cards. Also, to add to an inability to distinguish gender, I made sure the armor had no gender differences.

My engineer. Is just the standard 1st priest with a hairstyle change. Represents Jeff from Earthbound (i.e. without the sunglasses).

Heavy LOTR influence here. Using the Ressurect skill alot made me recall Elrond resurrecting Frodo in The Fellowship of the Ring. It has got to the point to where, in my head, I would go, "Lasto beth nin, tolo dan nan galad!" ("Hear my voice, come back to the light!" in Sindarin, an Elvish language). So I gave him an Elrond-esque appearance. When I got the buffs (and the weapons to apply them to) I applied Rez on his weapon. In my lore, he is indeed twin to my first warrior, and his decision-making skills outmatch all of the Elf-kind. In my lore, this character's stark opposite to my first warrior is his more careful nature.

I have stated before that Clerics in-game are more to the Elvish folk of LOTR. The first female Elf that is prominent in the story that comes to mind: Galadriel. Her appearance reflects such.

None of my Mages have any The Lord of the Rings influence. I represent them as divine spirits higher than the typical mage (which is mortal!), but not higher than Eru himself (Meaning, they are Maiar, but ok, maybe some LOTR material was used). Meaning, they are immortal. They cannot truly die. What a pity...

Lore Specific: They each bear a magic ring that is said to enhance their powers while in their posession. In the posession and use of others however, the user was not granted any enhanced abilities.

The heptametric verses below are their own composition, and are not found on the rings.

"Unique am I among us. But I shall not tell the cause."
— Personal heptametric verse.

When I first played Happy Wars, I noticed the first mage was a girl. A thought then hit me. There was stereotyping in (medieval) Europe that red-haired (and green-eyed) people were often accused for witchcraft. So I made her red-haired. Then another thought hit me, and that red is commonly associated with fire. So when I could, I gave her buffs assosciated with fire (Fire Enchant+, Magic Napalm+, etc.) Then another thought hit me. In my lore relating only to my HW characters, I made her a direct daughter of a deity of fire, and a deity of plants. I then set her voice to Childish to reflect it. In my lore, I also portray her as mischievious and an Antic Master (especially because she likes to rig Napalm traps; this is also partially due to her lineage). Bearer of Urya (platinum-silver with no motifs for the gem mount. Gem is a ruby).

"Never will I be resting. My push is my word to all."
— Personal heptametric verse.

Wind-based bias, and so, is my Zeph, and has buffs reflecting wind like how my first's bias toward fire gives her fire-based buffs. As a stand-in for green, changed his hair to blue-gray. Bearer of Vilya (platinum-silver, with cyclone motifs near the gem base. Gem is an emerald).

"I will be calm, or will not. I am Ice; you will conform."
— Personal heptametric verse.

Ice is my favorite element (in Pokémon, especially). So to reflect this, I gave him Ice-based buffs (save for one). I changed his hair color to Ice to reflect this. Bearer of Helgya (platinum-silver, with snowflake motifs for the gem mount. Gem is a sapphire).

My characters for Steam are not the same as my Xbox characters (to eliminate the need to retcon the arc).

Other games I play

Here is a list of other games I play (feel free to catch me on whatever applies) (list is not all-inclusive). 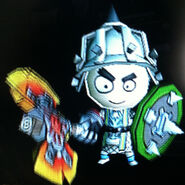 My first Warrior, lord of the 3rd of the Three Realms. 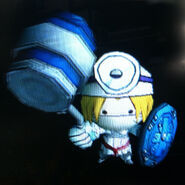 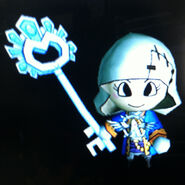 The Duchess of Fire, being my 1st Mage. 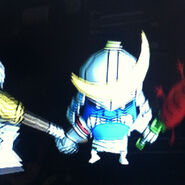 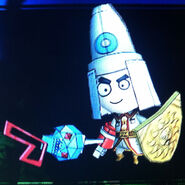 My 2nd priest - and the one character I most commonly use.

Gwaihir, the Lord of Wind. Zeph. 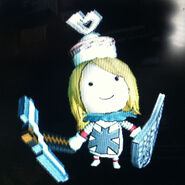 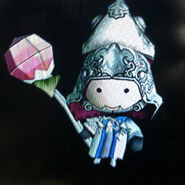 The Baron of Ice - my 3rd Mage.
Add a photo to this gallery

Retrieved from "https://happywars.fandom.com/wiki/User:729MendicantTide?oldid=17497"
Community content is available under CC-BY-SA unless otherwise noted.