Sunset is a map in Happy Wars. Also known as the bird map, the chicken map, the chicken gun map, or the Autumn map, Sunset has Autumn and bird or chicken themes. It is a medium sized map that is generally remembered by the powerful central cannon, known as the bird cannon. It is also known for the player launchers which are also known as chicken jumps. It has three Towers, each on an island separate from the castles.

The Sunset map was released on October 12 2012, alongside the release of Happy Wars. This map has 3 towers that you can control. This map also has the special mounted weapon, the bird cannon. You can fire up to 5 powerful shots with this weapon. 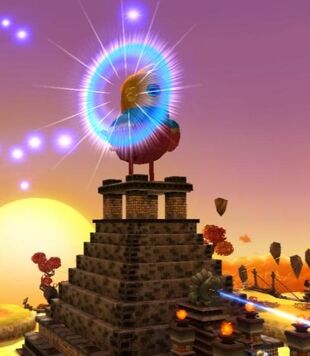 Flank Route: Run to the side when exiting your castle (left side for Black and right side for White) and walk up the stairs to the launcher. Ride the launcher. After landing, run to the other side of the platform to the second launcher, ride the other launcher to land next to the enemy's Castle.

The Bird Cannon: The large bird statue in the center of the map is a weapon, you enter it like a cannon and ballista. However, you must own the tower next to it in order for it to be used. You are also vulnerable while using it due to the fact that your character stands outside of the weapon. 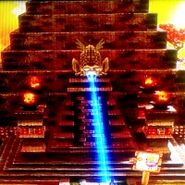 Cannon Gunner Area
Add a photo to this gallery
Retrieved from "https://happywars.fandom.com/wiki/Sunset_(Map)?oldid=19821"
Community content is available under CC-BY-SA unless otherwise noted.