Spike Tails (often called Bone/Fossil Fish) are environmental hazards that appear in Pumpkin and Deep Sea. They appear periodically during the match at their designated spots (around the central tower in Pumpkin and in the large, sandy area in front of the Castle in Deep Sea). Players can be hit by Spike Tails, which can damage players for a moderate amount of health and causes them to be knocked back. Players standing in the area they appear in will be notified of an attack by Spike Tails via a screen shake. 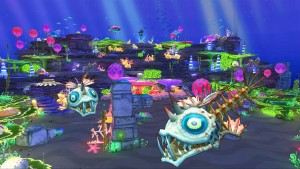 Retrieved from "https://happywars.fandom.com/wiki/Spike_Tail?oldid=19354"
Community content is available under CC-BY-SA unless otherwise noted.