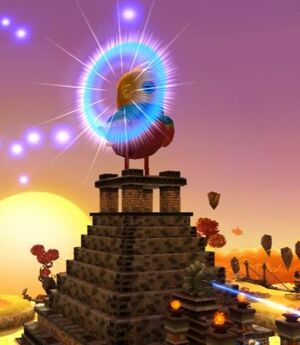 The Bird Cannon (also called the "Chicken Cannon") is a very powerful but slow firing Mounted Weapon that can be found on the Sunset and Bird God Maps. It takes time to power up one shot at a time up, can power up to five shots, and fires all shots at once. You can lock on to 1-5 enemies at a time.

It is unbreakable, and can only be used by the team that is in control of the tower near it.

Retrieved from "https://happywars.fandom.com/wiki/Bird_Cannon?oldid=19710"
Community content is available under CC-BY-SA unless otherwise noted.